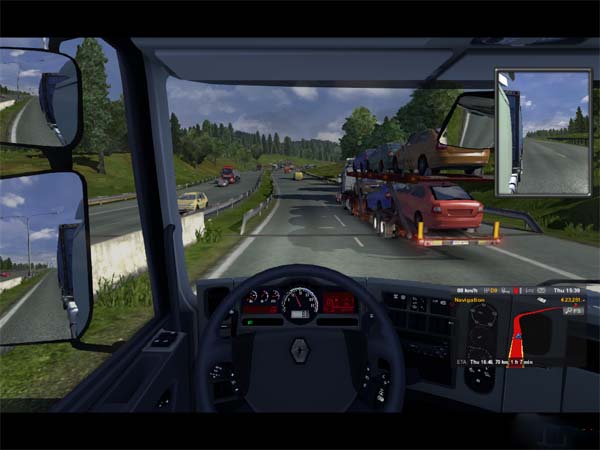 This is a patched ETS2 executable. It’s a drop-in eurotrucks2.exe replacement.
It can generate considerably more traffic than the stock version. The reason
why this is a modified .exe, instead of a “usual” .scs mod, is simple: Most of
the traffic stuff is hard-coded in the executable and can’t be configured. The
file must be reverse-engineered, analyzed, and then modified at the machine
language level. But don’t worry, I aleady did all that work 🙂

A few of the “settings” are parameterizable. Namely, it is possible to indi-
vidually tweak the (maximum) number of vehicles spawned in cities, on “normal”
roads, and on roads with more than one lane per direction (e.g., highways).
And these settings are available for day and night, so you can control whether
you want less traffic at night (or not). (The unpatched ETS2 uses 63 during the
day, and 21 at night).
Plus, you can control how many trucks you want to see (at most), again for
those 6 cases individually. The unpatched ETS2 limits this to 4, unconditionally.
Finally, there’s what I call the “spawn boost”, which allows to control how often
spawn attempts occur. The default seems to be once per second. Setting the boost
to 8 will produce 8 attempts per second, etc. Values higher than 60 (0x3C)
probably don’t make sense.

These settings must be edited directly inside the .exe using a hex editor. You
should have a basic understanding of the hexadecimal number system, and know
how to properly use a hex editor, before you attempt this. The included file
editing-parameters.png shows where the settings are located and what the
defaults are. ONLY edit the bytes from 55C5F2-55C5FF! Note: I may have screwed
up the description a bit for the total vehicle number (they may be one less than
what I wrote in the description) – anyway, 1 more or less doesn’t really matter.

Notes:
* Don’t expect a setting of FF to actually produce 255 cars on the screen. In
practice, it’s rare for the game to spawn more than 100. I think the maximum
that I ever got was around 180, but only when disabling all sanity checks (i.e.
not practically playable because cars would spawn on the truck etc.)
* Of course, all these settings somewhat affect performance. It seems like trucks
are really eating fps. Just experiment and turn some settings down if you have
performance problems.
* Don’t expect to be in dense traffic all the time. There are technical reasons
why this is impossible. Traffic may – sort of – come and go in “waves”.
* So don’t expect this mod to do miracles. Still, I believe the game is much more
enjoyable with this modification.

…and sorry for the crappy quality of the screenshot. It was taken on a 5 years
old laptop :-/ 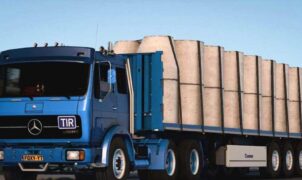